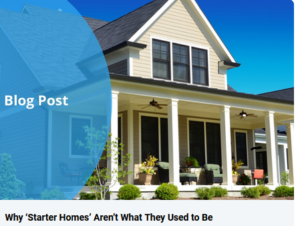 Today, first-time homeowners are buying more square footage and putting down roots, in what may mark a fundamental change in family housing. But experts say there are still ways for families who can’t afford fancier properties to cope.

A starter home is “smaller, it’s cheaper and in an area that might not be in an area where you eventually want to settle down,” says Dr. Issi Romem, chief economist for Build Zoom, a real estate construction marketplace. But these days, first-time buyers aren’t choosing starter homes.

That’s partly because novice homeowners have become “a financially select group,” according to Romem. “Not everyone who would have become a first-time home buyer a few years ago can become one now,” he says.

Stagnant wages, rising home prices and tight housing inventory are skewing the population of buyers toward higher earners — and they’re buying bigger homes. In fact, in 2013, first-time buyers purchased homes with an average 1,845 square feet, while the average home in the U.S. is just 1,819 square feet, according to Romem’s analysis of data from the Census Bureau’s American Housing Survey.

“So those home buyers who probably would have been looking for the lowest-end homes 10 years ago during the housing boom are today just not able to buy. And those that are able to buy are looking further upmarket,” Romem says.

Your first and last home

Rather than buying a starter home and planning to upgrade in five years or so, first-time homeowners are buying and staying put, according to research conducted by the National Association of Realtors.

“When they do purchase, they’re planning on living there longer than buyers that we’ve seen in the past,” says Jessica Lautz, NAR’s managing director of survey research. “They’re expecting to live there 10 years.”

That trend is borne out in another survey, fielded by Bank of America in early 2016. The research found that 75% of first-time buyers would prefer to skip the starter home stage and find a house that meets their present and future needs.

And more than one-third of those surveyed (35%) said they intended to be “one and done” — actually planning to retire in their first home.

So is this the end of the starter home? Romem offers one way to prevent them from going the way of wall-to-wall carpeting.

“I think that one solution for people who are finding it hard to afford a home today is to seriously consider which city they want to live in,” he says. “It’s extremely hard to be a first-time homebuyer in the expensive coastal cities — not just in San Francisco, but in L.A. and Seattle, and on the East Coast as well.”

He suggests would-be homeowners consider more affordable locales, such as Texas, Atlanta or parts of the Midwest.

“It’s a big deal to move, but that can make the difference between being able to buy a home and being a renter until the day you retire,” he says

More neighbors may be the solution

NAR’s research also finds that 80% of first-time home buyers are still purchasing single-family homes. Romem says that trend is unlikely to continue if economic pressures and construction trends don’t change. That means a fundamental shift in what we consider a starter home.

“We might not all be able to raise our kids in single-family homes anymore,” he suggests. Instead, parents will likely be raising families in condos, “the way people in other parts of the world do.

His final piece of advice is blunt.

“To be realistic, first-time home buyers should just accept a condo — or accept that they need to move to Texas.”

The article Why ‘Starter Homes’ Aren’t What They Used to Be originally appeared on NerdWallet.

Get more information about buying a home, here

Buyer Etiquette You Should Know
February 11, 2022

5 Factors I Reveal Where the Real Estate Market Is Really Headed
February 10, 2022

Prevent Home Intruders in The Villages FL with These 7 Safety Strategies
December 28, 2021
Go to Top